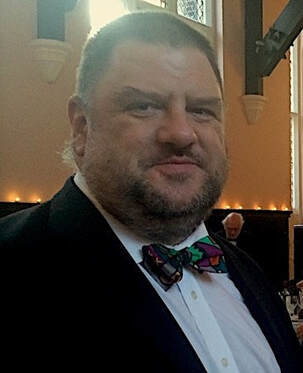 Simon Wood was an extraordinary man with an extraordinary idea.   A gentle giant, a quiet and shy man but with a heart of gold.   One of his great passions in life, other than good food and excellent wine, was choral singing and he made many friends through this in both the UK and in countries across Europe whilst on singing holidays and the like, and also singing in various choirs for more than 20 years, including Wimbledon Choral Society, OSJ Voices and the Brandenburg Singers.

When he was first diagnosed with bowel cancer some years back and received excellent treatment for it, he wanted to give something back to the medical world and decided that supporting research into this awful disease was the most appropriate way.   Just supporting it wasn't enough though and, having also lost a number of friends to cancer in the years prior to his diagnosis, he was driven to do something really tangible as a means of achieving this.    This became even more important to him in the subsequent years as metastases migrated to his liver and lungs.

Simon selected Cancer Research UK (CRUK) as the vehicle through which to channel his efforts.   ​As he saw it, if Cancer Research UK did their job successfully then, hopefully, we would end up in a situation where cancer support charities would not be needed as much.   Obviously that is still a long way off but wouldn't it be great if being diagnosed with cancer is no longer such a scary thing because you knew you would more than likely be cured fully.    However, not content with just making a personal donation to CRUK, he wanted to find a way of raising thousands of pounds for it.

Combining Simon's love of choral singing, especially those in the form of Requiem Masses, the need to do something different (as a means of attracting a high number of participants), some darn fine meals, plenty of good wine and a small group of friends, the ideas finally crystallised into the form of a 24-hour sing-a-thon of Requiems written through the ages.    In effect, it is a rather large Come-and-Sing event.   Simon wanted to do it on a grand scale for two reasons:  firstly, he figured it would not be much more work to do it on a large scale than it would be to do it on a small scale;  secondly, if he was going to put this much effort into it then he would want to raise a substantial amount for the charity.

Sadly, Simon's cancer developed further earlier in 2019, reaching his brain, and he passed away peacefully at home at the end of July that year.  Although he wasn't to see the third Requiem to Cancer event, we had committed to him that we would see it through whatever happened to him.

The event kicks off on the Friday night.   Most singers will check-in at that time and receive their hired scores.   The majority of participants do remain for most of the 24 hours (even if they take the odd kip or two up in the organ loft every now and then!), so ensuring we have a good number of singers at all times throughout the event.   There is even a core of hardy souls who do make it through the whole session but you do as much as you feel you can.   We delighted that you are there anyway.

During the course of the event, three major Requiem items are rehearsed and sung through.   In addition, for each event, there will be the world premiere of a life-affirming/'life goes on' anthem commissioned specially for the event and which will be learnt and sung at various times throughout it.   This item was written by Cecilia McDowall in 2016, Will Todd in 2018 and we were delighted that Janet Wheeler agreed to write the anthem for 2022 and, indeed, direct its premiere at the event itself.   Also, at some point during the event, there is a run-through of the Fauré Requiem at some ungodly hour for a bit of light relief.   As part of the initial registration, there is the opportunity to submit the names of people who you would like to be read out at Roll Call points during the event - either as a loss to cancer or as a survivor of it.

There are plenty of breaks, unending tea & coffee, cakes & savouries and a wine bar.   Being in the middle of Covent Garden, you are not  short of venues in which to eat and a lengthy break in the morning allows you to fill up on a substantial life-affirming breakfast.

Members of the public, friends and family are very welcome to come into the church throughout the event.

​The planned schedule can be found on the Schedule page when we've worked it out and agreed with the Music Directors involved.   It might not always be visible.

​Every single penny donated and raised as part of this event goes to Cancer Research UK.   We are very grateful to those individuals who cover the costs of certain major items so that we can achieve this and, notably, to the professional musicians who give their time gratis.
Click here to register/apply

The flower used in the branding of Requiem to Cancer is the Madagascar Periwinkle.    Simon chose it for its links to cancer treatment.

Botanical name: Catharanthus roseus
Madagascar periwinkle was for many years grown simply as an attractive bedding plant in tropical areas.   It comes in a range of pinks and reds that give rise to its other common name, rosy periwinkle.

Medicinal
The flower has been used in traditional medicine to treat a variety of ailments.   Planted around the world during colonial times, it quickly became known at the same time as a useful folk medicine for diabetics.   American and Canadian researchers during World War Two became aware that soldiers stationed in the Philippines were using it instead of insulin during shortages.

As a consequence, after the war, lab testing was done in earnest on the flower.  This revealed that the plant contained thirty alkaloids, strong plant chemicals that might be of use to humans. The leaves were found to contain two particularly valuable alkaloids, which work by disrupting part of cell division or 'mitosis', stopping the process when newly copied DNA is split into two parts to produce two identical new cells.

The new chemicals were tested on mice and it was found that they helped to combat cancers, in particular those of the bone marrow such as childhood leukaemia and non-Hodgkin's Lymphoma.    An effective chemotherapy treatment was developed and today the prognosis for sufferers has changed from a one in ten chance of survival, to at least an eight out of ten chance of some remission.    There's a short article on Kew Gardens' website about it here.

Ornamental
The Madagascar periwinkle is grown as a bedding plant in tropical regions and cultivated indoors as a house plant in temperate areas.  In the UK it can be seen growing in the Palm House at Kew Gardens.

​Threats and conservation
Madagascar's forests have been heavily impacted by human activity, but the Madagascar periwinkle's ability to thrive in disturbed areas has enabled it to survive on its island home.   Furthermore, it is widely established in the wild throughout tropical regions of the world, commonly cultivated in gardens and homes, and grown commercially for the pharmaceutical industry.   A collection of Catharanthus roseus seeds is held in Kew's Millenium Seed Bank based at Wakehurst in West Sussex.